Successful first well clean-up operation for the BE 801

From January 17-19th 2017, the Bourbon Evolution 801 carried out a well restarting operation for TOTAL, at the OFON field in Nigeria. This successful first operation for BOURBON marks the start of new opportunities.

This contract was expected to last for around three weeks; however, the team gathering BOURBON & the Contractor (for the execution of the operation) successfully completed its first well clean-up in around thirty hours. The well had been shut-in 6 months ago with muds and brine, and needed to be put back in production. TOTAL therefore enlisted the services of Bourbon Evolution 801, which was specially fitted with additional storage capacity, centrifugal pumps, and hydrocarbon separators, as the operation is usually carried out from a platform. "It was first necessary to connect to the well via the OFD1 platform," explains Thibault Marion, captain of the Bourbon Evolution 801. "Then, the valves were slowly opened: monitoring progressively pressure outlet. Jointly with TOTAL, we were prepared for autonomous gas lift or stimulated restart." Once the connection to the reservoir was opened, the well pressure was sufficient in itself to remove the mud / brine plug: the vessel collected 60 m3 of mixed brine, muds and crude oil, which was then offloaded dockside. When the proportion of crude oil in the mixture reached 95%, the well was then connected back to the production manifold. Substantial risk assessment with TOTAL was performed to review all situations including noise level &  heat radiation in case gas flaring would have been required on the platform. "Specific attention was paid to prevent any release of gas and hydrocarbon content due to this specific operation. Joint cooperation between TOTAL, BOURBON and the contractor company led to an efficient operation and restart of well." he adds.

"The main highlight of this operation was the crew's considerable flexibility and ability to adapt to a new type of operation, in addition to changing requirements over time"

CREW FLEXIBILITY AND ABILITY TO ADAPT

Factors contributing to the success of this operation included: process & procedures analysis in preparation for the operation (from the reservoir to the well, platform and vessel, with a special focus on emergency shutdown and safety valves), as well as a risk assessment carried out onshore beforehand, the presence of HSE personnel onboard, and an experienced crew. Equipped with a dynamic positioning of the highest reliability (class 3), the Bourbon Evolution 801 also boasts a 150 t heave compensated crane, 1,000 m² of deck surface and a capacity of 105 passengers. The innovative aspect of this operation was the surface area that was freed up on the platform and transferred to the vessel saving time while increasing safety. "The main highlight of this operation was the crew's considerable flexibility and ability to adapt to a new type of operation, in addition to changing requirements over time," explains Hélène Butat, Bourbon Evolution 801 Project Manager. "We pushed the boundaries of our areas of expertise and we learned a lot." In these difficult times, business diversification is an undeniable advantage, and this first successful well clean-up operation will certainly open new doors for BOURBON. 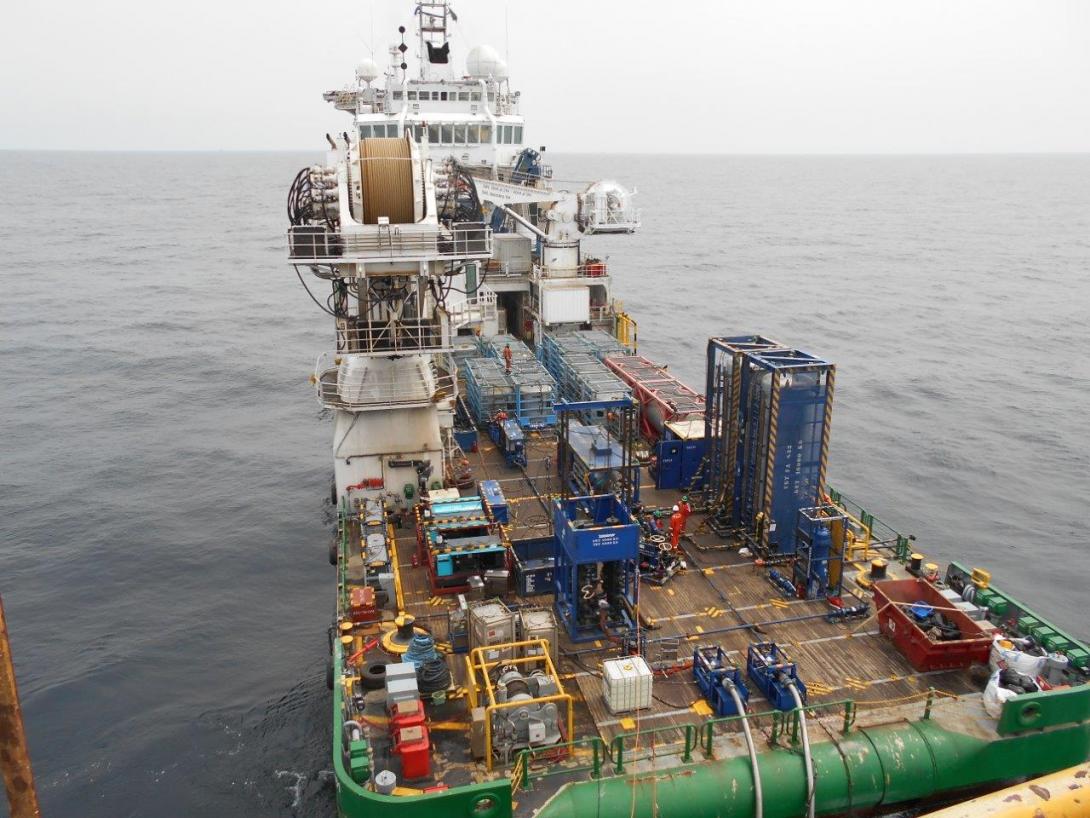